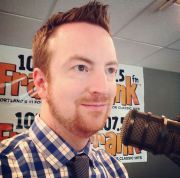 My name is Leif Erickson.  No, really, that’s my name, on-air and off.  I am a Central Massachusetts-born, Maine-based radio personality with well over a decade and a half of success in the business, specializing in Classic Hits, Classic Rock and Oldies with additional experience in Country and Mainstream Rock.  After a few years as jack-of-all-trades at heritage Claremont, NH rocker Q106, I have served as a consistently high-rated afternoon jock on Classic Hits 107.5 Frank FM in the Portland, Maine (#90) radio market since 2005, as well as the station’s longtime music director, assistant PD and Public Service Director.  In addition, I have supplied daily remote voicetracking for various radio stations over the years in Rockland, ME, Nashua, Concord, and Lebanon NH, Barre-Montpelier, VT, Westerly, RI, Springfield, MA and as far away as Alexander City-Sylacauga, Alabama.

I also serve as a “voice of the mountains” for Snocountry Mountain Reports, voicing localized ski reports on dozens of stations daily in markets as large as New York City and Philadelphia, and as small as Escanaba, Michigan and Grants Pass, Oregon.  I first joined Snocountry in 1999.

I reside in the greater Portland, Maine area with a few furry feline roommates.  I have a great passion for the golden era of album rock, from the Stones, Beatles and Who to King Crimson, Quicksilver Messenger Service and Captain Beyond.  Ask me about why Al Kooper is so great sometime, and make sure you have a good half-hour or so for the answer!  In addition to skiing I'm an off-again/on-again runner, dabbling the occasional 5Ks and 10Ks. (Goal for 2016: to break the hour mark in Maine's famous Beach to Beacon 10K!)

You should know I’m a baseball nut.  I’ve been an avid Red Sox fan since birth, and if you namedrop Morgan Burkhart and Dana Kiecker, I'll know exactly what you're talking about.  I am proud to say I also hopped on the Pirates bandwagon before they started almost winning again.

Connecting with my listeners daily in New England (and across the country) is a joy.  I hope to further spread that joy with your listeners and clients through quality remote voicetracking, and/or through professional voiceover reads.﻿ To be in touch, use the form on the Contact page!

When Prince died in April of 2016, Portland's local NBC affiliate interviewed me in the studio about his impact.

Interviewing one of my favorite musicians, Jon Anderson of Yes, in advance of a solo show in Maine.  A personal and professional "thrilling moment" for me as a broadcaster and a music fan.

One April 1, I just decided to "go Francophone" for the first hour of my airshift.  My Francais is a bit comme-ci, comme-ca.